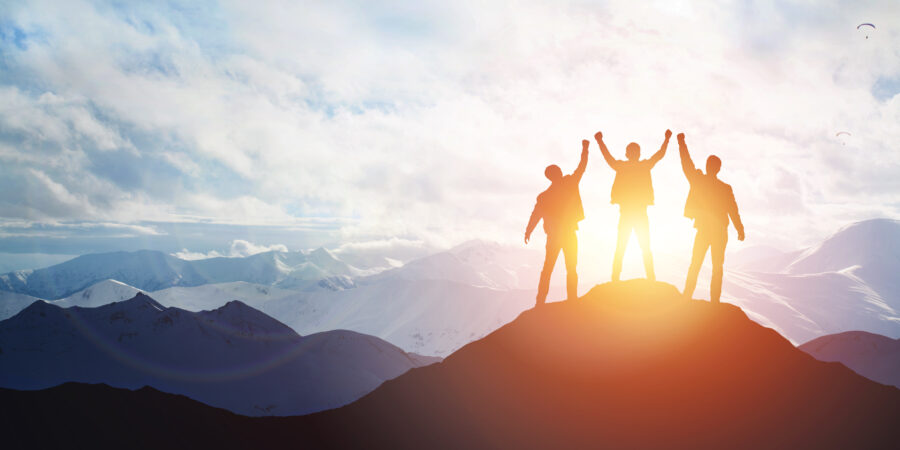 OKR – The Key to a Successful Company

“If you don’t know where you are going, you may never get there.”

In 1999, Kleiner Perkins invested $11.8 million in a fledgling Silicon Valley company that had ambitions to reach $10 billion in revenue. The company’s goal: to organize the world’s information and make it universally accessible and usable. Today, 23 years later, Google generates revenues of over $180 billion with a valuation of over $2 trillion (Fortune, 2022). In achieving and, above all, focusing on such lofty goals, Google applied, among other things, the OKR concept that John Doerr had given the company at the time in his role as investor and advisor.

OKR, short for “objectives and key results”, is a management method that helps ensure that all activities contribute to the achievement of the same, most important goals within the organization.

Incentivation Is the Wrong Motivation

As the 2016 example of Wells Fargo shows, defining, measuring and incentivizing the wrong targets can also wipe out $30 billion in market capitalization overnight. To optimize their own target achievement and earn bonuses, some relationship managers reached deep into their bag of tricks and let their creativity run wild. Without the customers’ knowledge, credit card accounts were opened at the end of the year in order to achieve the target dictated from above of opening as many credit card accounts as possible. The targets set did not add any value to either the bank or the customer. On the contrary, this action resulted in an investigation by the authorities and thus reputational damage, and not only lost the aforementioned $30 billion corporate value mentioned above, but also cost over 5,000 bankers their jobs. The initial idea of promoting the culture of the company with the set goal and its incentivization eventually led to damaging it.

What the customer service representatives at Wells Fargo were up to is an extreme example of what Lars Vollmer calls business theater in his book “Back to Work”. By this he means the “pretend” mode in many companies, in which work is played in order to look good for the bonus at the end of the year. This includes endless meetings, producing reports and ritualized annual reviews. It all takes a lot of energy and makes you sick. The goal should really be to generate value for customers.

Management by Objectives Has Had Its Day

Winslow Taylor and Henry Ford were pioneers in both measuring manufacturing performance and analyzing how to increase it accordingly. Both believed that efficiency and profitability were achieved through authority. Those who issued the orders would know best what employees should do and how to accomplish it in the best and least expensive way, so they should delegate work tasks down the hierarchy accordingly. There were critical voices, such as Mary Parker Follett, who advocated power sharing and joint decision making as a better option as early as 1926 in her essay “The Giving of Orders”. She also supported replacing hierarchies with networks (Doerr, 2018). However, this view had not yet gained acceptance at that time.

Then a few decades later, in the 1950s, Peter Drucker rejected the Taylor-Ford model. Drucker believed that a company should be built on trust and respect for its employees. An important feature of our nature is the need for co-determination, and it is this need that motivates us to want to achieve the goals we set for ourselves. He dealt with this principle, also known as “management by objectives and self-control”, in his book “The Practice of Management” (1954). The principle known as MBO has been adopted by many companies. In the application of MBO, as in OKR, employees are involved in the process of defining goals and are free to choose how they achieve their goals. The goals are usually quantitative and thus the focus is primarily on the result. A well-known company that followed the MBO principle was Hewlett-Packard. Although numerous studies proved the success of the MBO model, the limitations of the model nevertheless caught up with the companies. Centralized control and sluggish transfer of goals in largely independent, siloed corporate departments do not bring MBOs the success they need. Goals are passed down from the top without actively discussing them with employees or updating them during the year. As a result, goals are worked toward that are no longer worth pursuing, and opportunities are missed. Some companies have even decided to introduce soul-less, context-less numbers such as key performance indicators (KPIs), as Wells Fargo did in the example above. These metrics show how many contracts employees have signed in a quarter, for example, or how many products they have sold. In doing so, I do not define my goal or how I will achieve it. KPIs are numbers that represent the output of a process that already exists. KPIs in combination with an incentive lead even less to the desired goal. In fact, it prevents employees from taking risks because you could be punished for it. If the bonus is determined only on the basis of KPIs, employees will try by hook or by crook to achieve these figures. In contrast, OKRs transparently show which activities I will pursue to achieve my goals. In addition, these so-called key results are discussed with the supervisor and, at best, challenged by the team.

The world is becoming increasingly unpredictable and at times quite chaotic. BANI puts this change into words, describing the world as brittle, anxious, non-linear and incomprehensible. This makes it all the more important for a company to be able to react appropriately to new circumstances. The financial industry, which is still in its infancy when it comes to embodying agile values and principles, has a more dynamic management tool at its disposal – “Objectives and Key Results” (OKR). It enables driving on sight. This means that I adapt my goals and activities to changing conditions.

Figure 1 uses brief examples to explain key differences between MBOs and OKRs. OKRs additionally specify how targets are achieved, at what intervals they are evaluated and adjusted, and are visible to all employees and, above all, ambitious.

Intel introduced OKRs in 1971 with Andy Groove, the father of OKRs. He used the core concepts of objectives and key results. Objective is the direction, that’s where we want to go. Key Results are milestones, and both are defined quarterly and operationalized so that their achievement is measurable.

Figure 2 illustrates an OKR from Intel from the year 1975 with the aim of showing that the new chip performed faster and better than the competition.

In order to achieve such ambitious goals, it is important to focus on the most important activities through which the goal can be achieved. This means, among other things, that a maximum of 3 to 5 key results should be determined for each objective. Objectives are based on the goals of the company. It is therefore up to the CEO and his team to formulate the ambitious objectives as precisely as possible and to align the key results accordingly. The other areas and teams in turn define their objectives on the basis of the key results of the previous level. Transparent communication and presentation of the OKRs additionally enables alignment of the objectives and guarantees that everyone in the company is working on the right goals. Another benefit of publicly viewable goals is the ability to get feedback on OKRs and adjust them accordingly. Knowing what someone is working on also allows all colleagues to offer their help if it is foreseeable that someone will not be able to accomplish the goals on their own.

The definition of objectives including the corresponding formulation of key results can take some time. Thus, the establishment of a corresponding process is essential. The OKRs do not necessarily have to come from the top, but should preferably be defined bottom-up or horizontally. The goals should preferably be managed by a tool, e.g. Miro or JIRA. Only if they are easily accessible, editable, and transparent do they develop their full effect. Employees are more intrinsically motivated the more they see that what they are working on also has a direct impact on the company’s success. Bonus payments are not dependent on the achievement of OKRs. This would have the consequence of setting ambitions too low when setting targets and activities.

Another success factor is the clear designation of one or more OKR officers. This does not necessarily have to be the CEO. OKR owners ensure that everyone prepares their OKRs on time and that they comply with the company’s own guidelines. Supervisors should also be reminded that they are allowed to challenge their employees’ OKRs and should ensure that they are aligned with company goals. This includes status reviews during the current quarter. It is not productive to spend three months working toward a goal when it is already apparent after three weeks that the market environment has changed, rendering the goals obsolete. At shorter intervals (not daily), a decision is thus made as to whether an OKR is still relevant, needs to be adjusted, or even deleted altogether and replaced by a new one.

As in any process, the goals set are reflected upon and evaluated after each quarter. If the achievement of an objective is rated low, a reassessment is made. If the objective is still being pursued, it is necessary to determine what measures will be taken to achieve it in the next quarter. This ensures that the OKR process is also constantly being further developed and that experience is directly incorporated into the next quarter (see Figure 3). The figure also shows that additional agile principles are incorporated into the OKR framework. These include active communication and interaction, the involvement of the teams, since certain goals can only be implemented as a team, the creation of freedoms, reflection and feedback for continuous further development and, above all, focusing on the essentials.

OKRs are allowed to be visionary and above known capabilities. Innovation is essential for a company. If conservative or even the wrong goals are pursued, the same process is repeated every year in a company, which, as we know, leads to bankruptcy sooner or later.

“The definition of insanity is doing the same thing over and over again and expecting different results.” 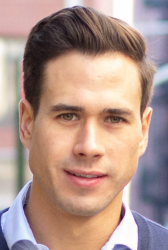 Fabian P. Lehner
Fabian is a Swiss/Portuguese banking professional with more than 16 years of experience working in Finance. In 2017 he completed the Master in Private Banking & Wealth Management at the University of Lucerne in Switzerland, graduating with a master thesis on Private Equity (PE) and Venture Capital (VC). Fabian completed the Oxford Fintech and Blockchain Programme at the Saïd Business School in 2019 to develop his skills in Fintech, Blockchain, AI, Crowdfunding and Quantum Computing. By way of his professional activities, his studies, and his active personal engagement with digitalization, he is not only well informed about the current development in the banking industry, but also personally involved in developing future trends and innovations with his own startup PriceHunterApp (until 2020). Fabian is part of "The Fintechrockers Club" and founding member and Community Partner of FinTech Connector Switzerland. He joined the Business Engineering Institute St. Gallen in February 2021 as a consultant and is now actively engaged in several projects helping banks expand their business models as well as understand and connect to FinTechs and other external players.