What Is the Theory of Disruptive Innovation?

Innovations surround us almost everywhere these days. They allow us to work from the comfort of our homes and communicate with people over great distances, using technologies that would not even exist without innovation, such as personal computers or mobile phones. In addition, innovation often makes products and services more affordable over time and accessible to more customers and offers them added value (Hwang & Christensen, 2008). Schumpeter already pointed out that innovation leads to the establishment of new industries and thus new jobs and increased prosperity, but that not all companies survive technological change. The reasons for this are very diverse and were already analysed in 1997 by Christensen in “The Innovator’s Dilemma” by means of several case studies (C. M. Christensen, 1997). His research shows that one type of innovation in particular leads to the demise of existing companies: disruptive innovation.

In his theory, Christensen distinguishes between “sustaining innovations” and “disruptive innovations”. Innovations are sustaining if they improve the characteristics of an already existing product. They are introduced by established companies in an existing market with the aim of positioning themselves more advantageously vis-à-vis competitors. The product features improved by the manufacturers are valued and considered important by “mainstream customers” (C. M. Christensen, 1997). This is the case, for example, in the smartphone market, where devices are equipped by manufacturers with ever-improving features (e.g. camera, battery performance, displays) in order to generate higher sales figures and gain further market share. In addition, these improved products are to be sold at a higher price (Hwang & Christensen, 2008). Disruptive innovations, on the other hand, either create a new market by addressing customers not previously served by incumbents (C. M. Christensen, 1997) or target less sophisticated customer groups that are responsible for only a small portion of the market leaders’ sales (C. M. Christensen et al., 2015). An example of a disruptive innovation is the establishment of digital music such as streaming. Disruptive innovations have lower quality at launch compared to established products – at least in terms of the performance dimensions that are important to mainstream customers (Adner, 2002). However, they are demanded by a smaller group of customers with lower demands on classic product features.

Figures 1 and 2 depict this interplay between customer demand for product improvements and sustaining and disruptive technological innovations, respectively, and their performance over time. The continuous lines represent the continuous improvement of existing products or services (“sustaining innovations”) or new products or services (“disruptive innovations”) over time (Hwang & Christensen, 2008). The dashed lines represent customer demand for improved product performance from different customer groups, from least demanding customers to mainstream customers (middle line) to most demanding customers. (Hwang & Christensen, 2008). Sustaining Innovations with high product performance also satisfy the requirements of the demanding customers, in whose segment the highest prices can be achieved. Disruptive innovations, whose product performance is lower but which are available at a lower price or have additional features, are initially only demanded by a smaller customer group. This customer group either has only low demands on the product performance (“least demanding customers”) or has only a low willingness to pay (part of the mainstream customers), which results in a low margin and smaller profits for the suppliers (C. M. Christensen et al., 2015). This makes the new competition of little interest to the incumbents, who prefer to concentrate on their main customers. However, this attitude becomes problematic when the new product improves to the point where it meets the requirements of the mainstream and the most demanding users in the market, thus becoming fully competitive (C. M. Christensen, 1997).

In Figures 1 and 2, it can be seen that the product performance of innovations, whether disruptive or sustaining, is generally improved at a higher rate than is demanded by customers (“overshooting the market”) (C. M. Christensen et al., 2015). This is evident from the intersections of innovations with customer demand (Hwang & Christensen, 2008). In terms of sustaining innovations, this means that incumbents add new, improved features to their products even though this is not (yet) desired or demanded by most customers (“least demanding customers” and “mainstream customers”) (Hwang & Christensen, 2008). The companies thus concentrate on the customers who have a high willingness to pay (“most demanding customers”) and thus represent the most profitable customer segment; the other customers are neglected (C. M. Christensen et al., 2015). Moreover, Christensen et al. (2015) argue that incumbents depend on the customers with a high willingness to pay and therefore exclusively make product improvements. Disruptive innovations are mostly introduced into the market by new firms, as the innovations of incumbent firms target the customers who promise high profit (Hwang & Christensen, 2008).

Through this, there is an opportunity for new companies to consider the unappreciated customer groups (C. M. Christensen et al., 2015; Larson, 2016). If the challenger’s target group is existing customers from the beginning, this is called “low-end disruption”. If the product initially creates a new market because it is consumed by non-customers – either because the relevant customer group cannot afford or does not want the established product or because the product is in demand due to a new feature – this is called “new-market disruption”. In both cases, disruption only succeeds if the disruptive technologies are improved in their product performance so that they are also demanded by mainstream customers in existing markets and displace the established innovations (Adner, 2002; C. M. Christensen et al., 2015). Disruption is therefore a result and only occurs when this displacement has taken place and the (until then only potentially) disruptive innovation is accepted by a broad mass. The phenomenon that innovations in existing markets perform better than expected by many customers is known as “performance oversupply” (Adner, 2002). It is one of the reasons for disruption, as the product performance of superior products has long since exceeded the requirements of customers, and other attributes that they previously did not consider important gain relevance for them in return (Adner, 2002).

The theory of disruptive innovation has often been misinterpreted and misunderstood in recent decades (C. M. Christensen et al., 2018). So, it can be stated that not every innovation is disruptive, even when one technology replaces another. Disruption is to be understood as a process in which an initially inferior innovation, which is not perceived as a threat by established companies, is improved to such an extent that established products and companies are forced out of the market.

Is Blockchain a Disruptive Innovation for the Financial Sector?

There are arguments both for and against this thesis. First, a technology in itself is neither disruptive nor sustaining; it is primarily about the innovations based on that technology and whether or not they have the potential to replace existing products and, in the process, incumbents. So, in the case of blockchain, we need to look at the use cases based on blockchain and the business models that come with it. In a survey conducted by the MIT Sloan Management Review Strategy Forum, more than half of the respondents felt that blockchain was not a disruptive innovation but a sustaining innovation (MIT SMR Strategy Forum, 2022). Reasons for this include that blockchain allows established institutions to process transactions more efficiently (MIT SMR Strategy Forum, 2022). Thus, in this scenario, the blockchain helps to improve an existing process and has an immediate added value for the mainstream customers of established institutions. Further, it is argued that there will be more of a combination of sustaining innovations and disruptive innovations (MIT SMR Strategy Forum, 2022).

“Low-end disruption doesn’t create new markets, you just gain market share against the old.” “New-market disruption competes against the original players by going after new customers that these [companies] aren’t interested in, selling them a simple product.”

For a blockchain-based innovation to lead to a low-end disruption, a superior innovation must exist in the market. In addition, the blockchain must be comparable to the technology on which this superior innovation is based. Thus, two levels can be considered for characterizing the potential for disruption: The blockchain technology itself and the use case or business model based on the blockchain. Since the blockchain enables a number of different use cases and business models, this approach can be considered reasonable. Generally speaking, blockchain technology is inferior in the sense that it is not yet possible to reconcile scaling and efficiency, i.e. transaction speed decreases with increasing transaction volume. This condition could therefore be considered to be fulfilled. In addition, there must be a customer group in the respective market that is oversupplied in terms of performance, i.e. there are comparable products and services that are characterized by higher performance than required. However, there are currently no comparable superior technologies with performance oversupply, nor is blockchain considered a simple technology that appeals to customer groups at the low end (less demanding customers). In my opinion, the hype triggered by the invention of the blockchain has resulted in immense requirements and expectations for the blockchain, even at a fairly early stage of development, and many companies are potentially expecting improved operationalization of the complex technology.

Even though the blockchain does not seem to lead to low-end disruption, it might still give rise to new-market disruption. This assumes that the introduction of blockchain into an existing market has created an entirely new market segment with a previously unserved customer group (underserved customers). Advocates of cryptocurrencies and P2P payments would argue, I believe, that this is the case. However, it could be argued that it is questionable that the existing and established market, with banks as intermediaries, will be replaced. Moreover, blockchain cannot be classified as a simple technology. The development of a new segment within a market, for example, the acquisition and trading of NFTs, such as in the art market, could possibly encompass all three required characteristics: (1) the target audience of the innovative product could not previously buy or use this type of product, (2) it makes a profit at lower prices per unit sold than incumbents, and (3) it provides lower performance for existing customers but higher performance for non-customers (Cote, 2022).

The question “disruptive, yes or no?” can therefore only be answered primarily on the basis of the use cases based on the blockchain, although there are always pros and cons as to whether these actually represent potentially disruptive innovations. In my opinion, the blockchain and its use cases do not target a customer group with less demanding requirements (“low-end customer”), as the expectations of this complex technology are very high. Furthermore, there is the question of “overserved customers”, i.e. customers who are overserved by existing technologies (and their use cases) or their characteristics. The characterization as a new-market disruption depends strongly on the use cases and business models that are based on the blockchain.

Adner, R. (2002). WHEN ARE TECHNOLOGIES DISRUPTIVE? A DEMAND-BASED VIEW OF THE EMERGENCE OF COMPETITION. Strategic Management Journal, 23, 667-688.

MIT SMR Strategy Forum. (2022). Is Blockchain a Disruptive or a Sustaining Innovation? What Experts Say. https://sloanreview.mit.edu/strategy-forum/is-blockchain-a-disruptive-or-a-sustaining-innovation-what-experts-say/ 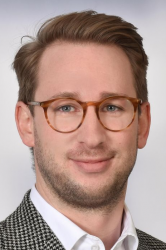 Benjamin Schaefer
Benjamin supports the CC Ecosystems as a PhD student in the field of blockchain and DLT. After his training at one of the largest regional credit institutions in Germany, Benjamin worked for several years at a renowned management consultancy. There, he dealt with the transformation and digitalization of nationally as well as internationally operating companies from the finance, automotive, logistics and consumer goods sectors. Benjamin is passionate about digital innovations, tennis and road cycling.