Scientists are people who work theoretically, are very correct and often withdrawn – so the widespread impression. Far from it, as I was able to experience at the 53rd Hawaii International Conference on System Sciences (HICSS): From a keynote on “bullshit” in the scientific literature to findings on artificial intelligence (AI) in game development and the future of work, exciting, very diverse and above all very practice-oriented topics were addressed. In the following I give a short summary:

How humans and machines learn from each other

In game development, artificial intelligence has been used for the design of game environments for several years. With the help of these applications, game developers can, for example, have a mountain landscape created and then decide in the last instance how large the mountains or how wide the rivers should be. So the strenuous work is left to the AI, the fine-tuning is done by humans – doesn’t sound so bad. Scientists around Prof. Seidel of the University of Liechtenstein have found out that this new way of working also produces a new form of learning – not only in AI applications, but also in humans. The process works as follows: The developer is proposed a game environment by the AI and can fine-tune it using a few controls. The developer notices that the game environment changes differently depending on how he operates the controls. The developer thereby gets to know the system better. However, since the system in question is also intelligent and can learn autonomously, it notices that the developer has adapted its actions and therefore (hopefully) offers the developer improved actions to choose from or calibrates them according to his use. For example, the sensitivity of the controller could be adjusted because the designer does not model very high mountains. As a result, humans and autonomous AI applications learn from each other, resulting in so-called “triple-loop human-machine learning” (Seidel et al., 2019).

Show me how you fill out a loan application, and I’ll tell you how creditworthy you are

Beyond the gaming world, I was also able to gain an insight into the future of customer rating. In particular, the company NeuroID which carries out the customer rating already during the credit application process presented itself at the HICSS. For this purpose, any behaviour of the customer during the filling out of the form is analysed, e.g. at what speed he or she types, whether characters are often deleted and how the mouse is moved over the form. For example, it is possible to find out whether the customer hesitates when entering information or whether he or she changes information significantly, which could be an indication that he or she would like to withhold information or even misrepresent it. Although the application encroaches quite strongly on the customer’s privacy and is not yet on the market according to the company’s website, the method is already amazingly precise and should not be dismissed as a Silicon Valley spinning mill for this reason alone.

Scientists in action against fake news and malicious manipulation

Apart from the technological developments, a scientific conference also has the claim to be uncomfortable. The word “bullshit” alone will certainly not appear in the title of a keynote speech in this country in the next few years; at HICSS, people are already a little more relaxed. The title of Prof. Wess’s speech was “Calling Bullshit in an Age of Disinformation” and dealt with how not only in politics – yes, there will be US elections again soon – but also in science the truth is being disregarded and how such cases can be detected. Here “bullshit” is defined as follows:

«Bullshit involves language, statistical figures, data graphics and other forms of presentation intended to impress, overwhelm or persuade – presented with a blatant disregard for truth, logical coherence or what information is actually being conveyed.»

The mission of the project with the same name, Calling Bullshit, is nothing more than maintaining the truth in public debates, especially in politics – a difficult undertaking. The project deals with false or strongly distorted reports in case studies and thus uncovers the “bullshit”, e.g. from (by now) well-known American news channels. It is not uncommon for the bullshit in the examples to be uncovered by means of logical thinking, such as knowledge of the matter addressed and average statistical knowledge. Nevertheless, Prof. Wess’ message to scientists is: Science does not always have to be overly correct in its wording, but it does have to be correct in terms of its veracity and the presentation of its results.

Is AI putting us out of work?

HICSS also addressed the future of work, particularly in view of the developments and potential impact of artificial intelligence. In the track “Future of Work” Prof. Sampson presented a task automation framework consisting of four job types: routine work, interpersonal work, expert work and interpersonal expert work. By analyzing all the jobs in the O*NET job database in terms of the interpersonal and creative skills required in each case, Prof. Sampson arrived at the following exemplary results:

The results of Prof. Sampson’s research make it clear that neither digitization nor artificial intelligence will destroy all jobs. Rather, we need to focus on redesigning jobs and prepare ourselves for the fact that AI applications will in future give us more cognitive support than business applications do today.

And last but not least: Yes, of course it was beautiful in Maui, as the following photo proves. However, scientific conferences are indeed very important for broadening one’s professional horizon, because here one can meet the luminaries of the field and put one’s own research to the test – my conference article can be found in the references. A very nice experience, for which I am very grateful and whose fruits I am trying to reap in the form of research – many thanks for the support to all research partners of the Competence Center Ecosystems!

Sampson, S. (2020). Predicting Automation of Professional Jobs in Healthcare. In Proceedings of the 53rd Hawaii International Conference on System Sciences. 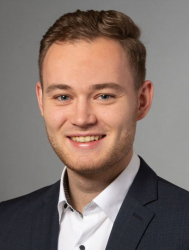 Christian Dietzmann
Christian is a PhD student at CC Ecosystems with a focus on the use of artificial intelligence in financial institutions. He became passionate about financial innovation while working for the competence center (then CC Sourcing) during his bachelor studies. After completing his Bachelor's degree in Business Economics (B.Sc.), Christian gained banking experience at UniCredit Group and dedicated his Master's degree in Management Sciences (M.Sc.) to "Banking and Insurance". He wrote his empirical master thesis on "Bank Innovation and Bank Risk-Taking". After completing his master's degree, he worked as a management IT consultant and advised companies in the financial and energy sectors.