In 2013, one billion smartphones were delivered worldwide, and it is predicted that global sales volumes in 2021 will amount to around 1.5 billion smartphones (Statista, 2019a). In addition, around four billion people already use the Internet today, which corresponds to around 60% of the world’s population (Statista, 2019b). These figures provide information about the high degree of penetration of smartphones and the Internet in today’s society and illustrate that information and communication technologies (ICT) have a decisive influence on the everyday life of the population.

The economy and society in general have benefited greatly from increasing digitization and access to ICT – examples include improved access to information and increased efficiency and productivity (Hitt & Brynjolfsson, 1996). However, this development also has its downsides. In recent years, both scientific studies and practical reports have increasingly pointed out that the use of ICT in both private and organizational contexts can lead to strong stress perceptions among the respective users (Riedl et al., 2012). This specific form of stress is called technostress and was first coined by the psychologist Craig Brod in the 1980s (Brod, 1984). In the scientific literature, technostress represents a subcategory of stress that occurs in situations where the use of ICT leads to the user being overwhelmed (Tarafdar, 2019). According to this, technostress is a reaction of the body to severe psychological stress caused by the use of ICT in a personal or organizational context.

How is technostress triggered?

What are the effects of technostress?

Studies show that technostress can trigger a variety of physical, psychological and emotional symptoms, such as exhaustion, headaches, anxiety, concentration problems, obsessive thoughts and, in the worst case, even burnout (Brillhart, 2004; Matteson & Ivancevich, 1987; Nelson, 1990). These effects are further intensified by increasing digitalization.

In an organizational context, it has been proven that technostress can lead to role conflicts, reduced productivity, emotional instability and reduced commitment to the professional activity and the employer (Ragu-Nathan et al., 2008). A study by Tarafdar (2007) impressively shows that the effects of technostress can endanger the health of employees in the long term through emotional exhaustion up to burnout. Particularly strong triggers of technostress in the work context are often the technological pressure to adapt due to the shortened half-life of technological knowledge and the constant communication noise caused by e-mails, messenger messages and phone calls (Böhm et al., 2016).

How can companies reduce technostress in the daily work of their employees?

Businesses can help to minimize the technostress arising from the use of ICT through various measures. It is important to emphasize here that the measures can only have their desired effect if they are implemented correctly. If this is not the case, they can result in increased stress (Weibler & Garman 2019).

Conclusion and advice for managers

In addition to a number of well-known benefits, ICT has the potential to trigger technostress, which can have far-reaching effects on the mental, physical and emotional health of individuals. However, managers can do much to reduce technostress, not only at the level of senior management, but at all levels of the organization.

A study by Böhm et al (2016) shows that the relationship between employee and manager has a significant influence on the development of technostress. This means that maintaining a good relationship climate and an open and transparent communication culture is associated with less emotional exhaustion and overtaxing with ICT. Managers should therefore try to build a relationship of trust with their employees and inform them transparently about planned ICT changes. In addition, managers should respect the boundary between work and private life and contact employees only within their working hours, despite their constant availability. 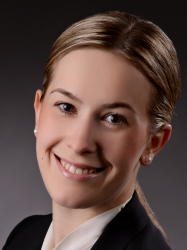 Katharina Schache
Katharina Schache has been a PhD student at CC Ecosystems since August 2019, where she is researching digital maturity and resilience in the field of Agile Transformation. She has a comprehensive education in the areas of banking, consulting and change management, starting with her bachelor studies in business administration with a focus on banking at the Baden-Wuerttemberg Cooperative State University. She completed the practical part of her studies at Commerzbank, where she switched to internal consulting shortly afterwards. Her work there motivated her to specialize in consulting and change management as part of a master's program at Università Bocconi and the Smith School of Business at Queen's University. She now brings her accumulated experience to the consortia research of the Competence Center.