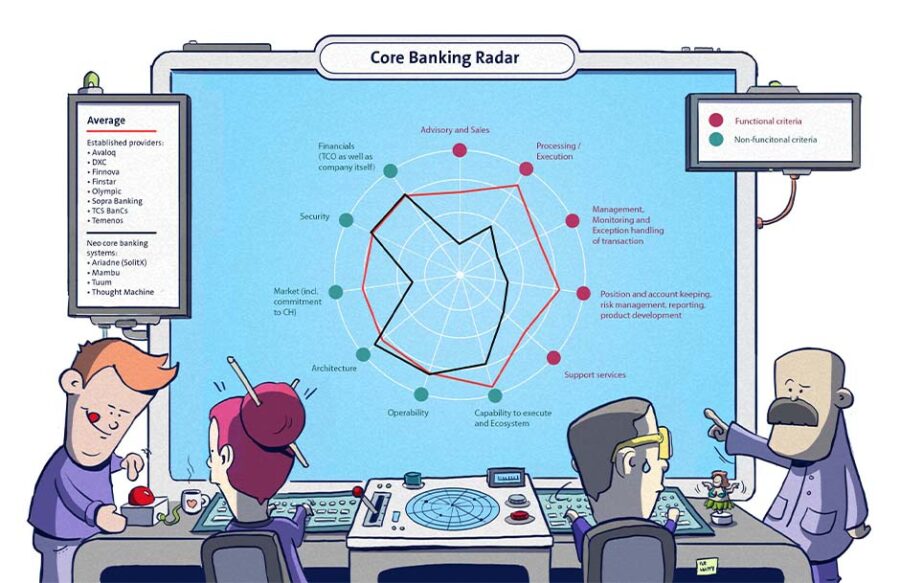 The latest Core Banking Radar article examines the system architecture of the bank of the future and, in this context, compares the four neo-core banking systems examined in earlier publications of this series.

This is an excerpt from the in-depth article.

Various trends, such as an increased focus on customer interaction and embedded banking, will shape the bank of the future. To provide services along the entire “customer journey”, banks are increasingly dependent on networking with other industries. The expansion of partnerships in the ecosystem goes hand in hand with the promotion of integration capabilities via APIs and steady investment in the banking architecture.

To structure the challenges ahead, a differentiation can be made between the three areas of customer management, service management, and system management. These three levels each contain architectural building blocks for the IT architecture of the future.

Depending on the strategy chosen (as described in an earlier article), the bank or the core banking system takes over the coverage of these building blocks:

Because of this, the bank relies to a large extent on its core banking system provider, and it should therefore seek a close partnership for further developments with this provider. The integration of additional services in the ecosystem along the customer journey, such as insurance, should be mapped in cooperation with the system manufacturer.

Front-to-Back strategy:
Customer interaction is increasingly being covered by other systems of the bank. Often, the foundation for this is laid with a dedicated integration platform. While the bank continues to rely on the core banking system for back-end functionalities, services are becoming increasingly decoupled from the core. Often the CRM system, which is itself a front-end solution, processes the data. Former CRM systems are increasingly developing into platforms that go far beyond the traditional core banking system with the associated core banking processes.

Modular (Best of Breed):
Depending on a bank’s requirements, the functionalities are put together in a modular form via various providers. This requires a high level of integration expertise and technological knowledge, which must be maintained and kept up to date in the bank.

For banks with a modular strategy, the service integration layer and the API layer in particular should be formed or developed. In the future, neo-systems, which support the best-of-breed strategy with a lean, high-performance core, will probably also be considered as booking engines in the modular strategy.

Emerging neo-core banking systems are developing continuously, gaining market share and are now also being used by well-known big players such as N26. New platform-orientated approaches with high levels of standardisation and flexible data management combined with modular, service-orientated architectures characterise these systems. With the greenfield setup, pure SaaS offerings, for example, can be implemented much more consistently. At the same time, there is limited functionality compared to known core banking systems, which are dependent on embedding in the ecosystem of other systems. The following comments characterise systems that are relevant to Switzerland from this perspective.

The following overview compares selected characteristics of the active neo-banking systems that have been reviewed in previous Core Banking Radar articles.

In contrast to conventional systems, neo-core banking systems offer greater architectural flexibility, but fewer things from a single source. All neo-systems are (sometimes exclusively) cloud enabled, based on microservices, and tend to require extensive IT know-how in the bank.

Since switching core banking systems ties up a lot of resources (costs, management attention and internal resources), especially due to migration, such a switch is avoided as far as possible.  In the short term, only a few Swiss banks are changing systems for individual reasons; a change currently has little momentum.

Banks basically have two options for the further development of their system architectures:

One of the following Core Banking Radar articles will deal with the derivation of viable transformation scenarios, moving forward towards the architecture of the future (in terms of resources, money, time).

In cooperation with the Business Engineering Institute St. Gallen (BEI), the Core Banking Radar of Swisscom has been monitoring the system support of banks since 2017, and analyses the most relevant systems for the Swiss market using a comprehensive assessment model.

Already published as part of the Core Banking Radar series

Christine Popp
Christine Popp is involved in strategic consulting projects at CC Ecosystems and is also helping to establish the Consumer Data Innovation Competence Center. She is interested in innovation methods and the meaningful use of data with regard to optimizing the customer experience. During her master studies in Business Innovation at HSG, she completed a Design Thinking training at Stanford University.