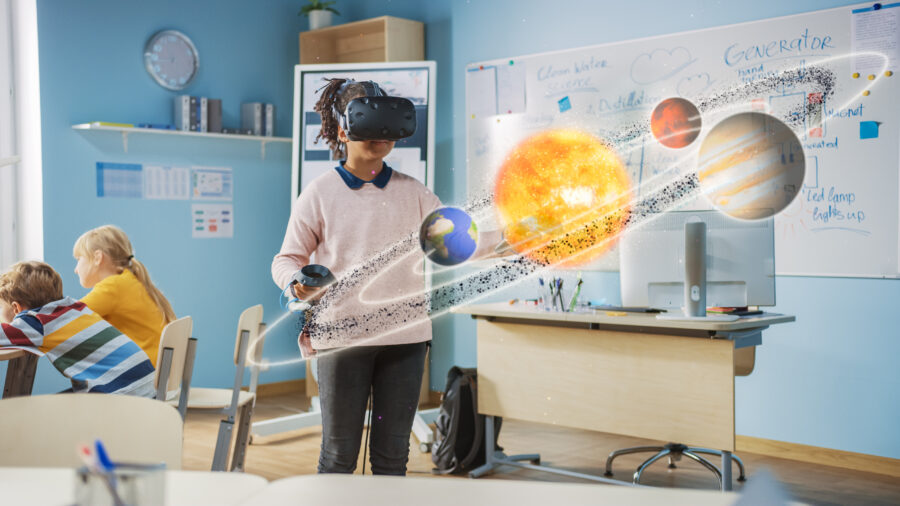 Augmented Reality in Education and the Financial Sector

The current corona virus situation has shown us that we are capable of taking big steps in digitalization in a very short time in the education sector. Digital methods have already found their way into schools and universities, but this sometimes hesitant development was reinforced to an unprecedented degree by the homeschooling required during the peak of the pandemic. Collaborative platforms have grown enormously, and new teaching and learning formats have been introduced in the form of explanatory videos and virtual lessons or group work. One technology, or rather a concept that has been largely ignored so far, but which offers great potential for improving both digital and face-to-face teaching, is augmented reality (AR), the enrichment of reality with virtual content.

What does augmented reality mean?

Augmented reality enables a fusion of reality with virtual environments. The real world is still perceived by the user, but overlaid with virtual objects from virtual reality (Zobel et al., 2018). Various marker and tracking techniques ensure that virtual objects are adapted to the real environment. Well-known markers are, for example, QR codes that contain information about additionally provided content. Tracking refers to finding the camera positions to display the correct environments. For example, GPS data is used or extracted from the camera image (Seifert, 2014).

AR applications were first used in a course in 1990 to train pilots in the use of their equipment (airplane, helicopter, jet) (Popescu et al., 2017). The use of AR applications to convey highly specific knowledge has been introduced into some areas of education, but has been more focused on the health care sector and the arts (e.g., physician training with AR or interaction with visual poetry).

What applications and potentials does AR offer?

The use of AR technology requires a technological end-user device, such as a smartphone or AR glasses, and permanent data exchange via WLAN, 4G or, in the future, 5G. With the help of this basic technical equipment, new types of knowledge transfer are made possible (Neumann, 2011). For example, students can interact with 3D objects of phenomena that cannot be observed in reality, such as a model of the solar system (Kerawalla et al., 2006). Or they can go on a game-based quest during which they solve tasks adapted to the classroom context and learn different perspectives and ways of thinking by taking on different roles (e.g. scientist, biologist, environmental activist, etc.).

An example of the latter is the scenario-based simulation “Alien Contact!”, which is used to develop mathematical thinking skills. In this simulation, students try to decipher the intentions of a group of aliens that have landed on school grounds by examining digital objects distributed on the premises and receiving clues from virtual people, always in connection with instructional mathematical tasks that must be solved in order to find the next object (Dunleavy et al., 2009). A generic approach to the use of AR is pursued by the concept of Imrattanatrai et al. (2014) with the app EduAR. The app offers the possibility to enrich learning materials with additional information that is displayed using AR technology and is intended to lead to a positive learning experience for students (W. Imrattanatrai et al., 2014). Lecturers upload the lecture slides together with additional information such as images and videos via a web interface, students scan the lecture slides with the app and see the additional information via AR.

The following table lists some characteristics that may be relevant for the future design of AR applications.

Above all, the increased interaction with the real environment during learning, the feeling of authenticity, is a major advantage of AR, which has been shown to promote the understanding of complex relationships and dynamic models (Rosenbaum et al., 2007). However, the benefits of AR also face a number of challenges. Here, I would like to emphasize the question of how best to integrate AR elements into the classroom. Augmented reality enables a new form of learning, which in turn requires a different form of support from the teaching staff. For which content which method should be used, whether conventional teaching methods or AR, and how the use of AR applications should be accompanied by the teaching staff, needs to be researched much more. On the other hand, the existing knowledge and skills for dealing with AR must be promoted in the context of media-didactic courses and training in schools and universities (Grafe et al., 2020). Table 2 summarizes further advantages and disadvantages of augmented reality.

And what is education doing today?

To date, Swiss universities have made little or no use of AR. This is certainly due to the fact that there have been too few long-term studies on the added value of the various possible applications of AR and that some of the existing studies are concerned with the Asian region, where people’s everyday lives are generally more permeated by technology than in Switzerland. On the other hand, the costs for the application of AR are still very high. But the potential added value of augmented reality for education can hardly be denied. However, its use also depends on the teaching concept. At universities, a large part of the teaching consists of lectures (usually face-to-face teaching, the teacher imparts the knowledge). An evaluation of modules from the Bachelor’s programs in engineering, economics and social sciences in Germany shows that lectures account for up to 50 % of all courses (Reinmann et al., 2013). There is potential here to supplement the rather theoretical lecture units with AR elements by embedding theoretical information in practice-oriented environments, thus generating motivation and deeper knowledge acquisition among students (Fehling & Hagenhofer, 2015).

The potential of AR has not yet been explored to any significant degree and in the future there will be no way around augmented reality. The characteristics shown in table 1 can of course not only be applied to education. For example, visualization can be used in any service area and generate added value for customers. Google has recently reduced its virtual reality (VR) development and focuses on augmented reality (AR). A number of other industries have also recognized the potential of AR early on, such as the automotive industry, which uses it for showrooms[1], or assembly companies[2]. Often the acceptance of new technologies is still somewhat inhibited at the beginning, but in the field of Augmented Reality this is certainly also due to the fact that the middle user level does not yet include any applications. There are AR applications for leisure time (PokémonGo, drones, etc.), as well as AR applications for highly specific users such as doctors or fighter pilots. The middle level, which would provide the greatest value proposition for us customers, is not yet occupied and in general AR technology is still waiting for its big breakthrough. But the technology is there – with our smartphones we hold augmented reality in the broadest sense in our hands every day.

What is the financial sector doing with augmented reality?

This wouldn’t be the CC Ecosystems blog if we didn’t finish by looking at which augmented reality applications have already found their way into the financial sector. The financial sector has produced a number of sample projects that deserve a closer look. On the one hand, the Commonwealth Bank of Australia has launched the application “Property Guide”, which allows the user to see which properties are for sale in his area. If interested, he can directly access additional information about the property, all this within an extended reality (Commonbank, 2020).

Citibank has introduced an experimental workstation with Microsoft HoloLens for the bank’s traders, which enables them to visualize complex data sets and make decisions for further action in the team (8Ninths, 2020).

The future will hold a lot in store for us

Some application scenarios in the financial sector are thus already available, with some of the characteristics identified in the educational context of AR (see Table 1) also being used here. In order to include the customers, it is important to be able to display additional information if required. Although it is currently possible to give advice to bank customers via video chat, this video technology quickly reaches its limits when it comes to presenting product information in a visualized form or to convey a direct proximity, which is both possible using augmented reality.

With appropriate AR applications, the customer advisor could sit at your table at home and give you a consultation. This may still sound futuristic at the moment, but future generations will demand and promote more and more innovations – not only in education, but in all service sectors. So it is not unreasonable to predict that the next generation of customers will require a higher level of digitalization.

For the future, I hope for increased use and the speedy breakthrough of augmented reality.  For my part, I will not only follow what is happening, but I will actively participate in research on AR services for everyday life. 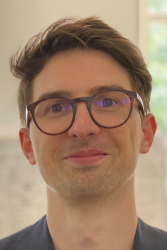 Joël Eugster
Joël Eugster is an industrial engineer (B.Sc.) and business information scientist (M.Sc.) and combines business and technology for the benefit of our customers. For more than 3 years he has been applying his broad expertise to the field of business engineering. Prior to that, he worked for more than 6 years as a project manager in large international companies in the area of investment and optimization projects. His passion is the analysis and design of business models and digital transformation, where he convinces with innovative methods. His experience as an officer in the Swiss Army and his work as a lecturer and examination expert at various educational institutions round off his profile.